Below is the link to a kickstarter for the artist John Connell, organised by his son, the writer Brendan Connell. 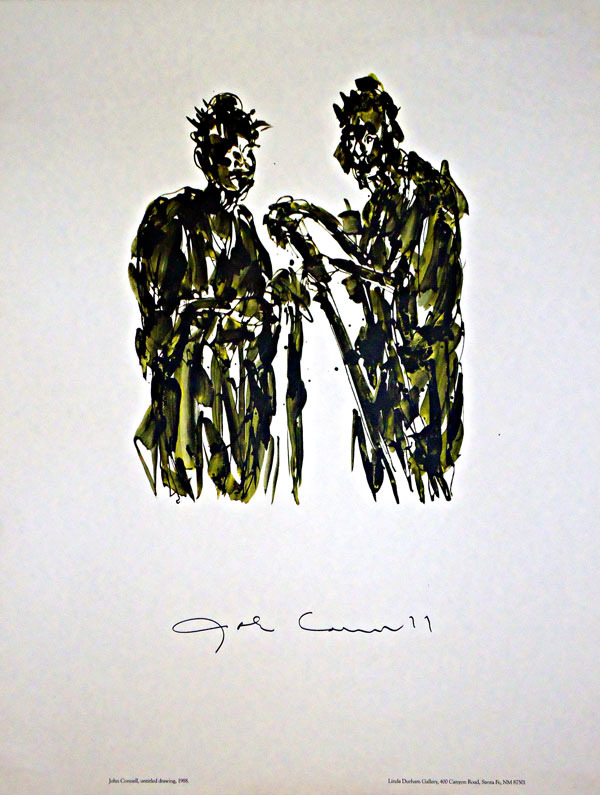 Why Do I Still Have Eyes?

A comprehensive book on the artist John Connell

In spring 2014 Radius Books, an award-winning non-profit publisher based in Santa Fe, New Mexico will be publishing a comprehensive book on John Connell. The book will be co-curated by Brendan Connell, who is the person responsible for this Kickstarter.

My father John Connell was one of the most well-respected artists to ever work in New Mexico. He showed his work at most of the major galleries and museums, painted murals around the state, and received wide recognition.

Though his work has been documented in numerous museum catalogues, newspapers and magazines, there has never been a comprehensive book of his work.

Shortly before he died, he and I and some of his colleagues had begun discussing the publication of a book on his work. It is my intention to see this project through to completion.

John Connell (1940–2009)­­­ worked prolifically in painting, drawing and sculpture through a fifty year career. His ﬁrst exhibitions were in New York City in the early 1960s and were early attempts at what would become the elaborate environments he is known for. He was the set designer for the San Francisco Mime Troupe, before moving to New Mexico. He is known for large installation pieces of figurative sculptures made from papier-mâché and tar, as well as his numerous drawings, paintings and sculptures made from a wide variety of materials. His work is in many public collections including The Albright-Knox Gallery, the Amon Carter Museum, and the Metropolitan Museum of Art.

The book is planned for Spring of next year, and the publisher is a non-profit publishing company based in Santa Fe, New Mexico, who donates at least 300 copies of every title they publish to a nationwide network of libraries and schools, with the hope and expectation that these books will reach and inspire new audiences, particularly young people.

I have already raised $26,425 from various private donations and foundations.

However, an additional $5,575 is needed to meet the production budget goal.

The book will be a beautifully designed hardcover, with a cloth cover and dust jacket. Donald Hess, of the Hess Collection, has written a preface to the book. The art writer MaLin Wilson will write the introductory essay. Aside from numerous photos of John Connell’s art, there will also be samples of his writing. The back of the book will have a timeline and extensive biographical information put together by Brendan Connell.

It's a fantastic looking project--with a fantastic title--and Brendan has been posting various bits of his father's work over the last week on facebook, all of it terrific and wonderful, in my opinion. I haven't donated yet (I have a set of bills to pay in the next couple of weeks), but plan do so at the end of May, wherein I hope to find the project already funded and on the go, and my money will be only for prostitutes and drugs for those involved.
Collapse