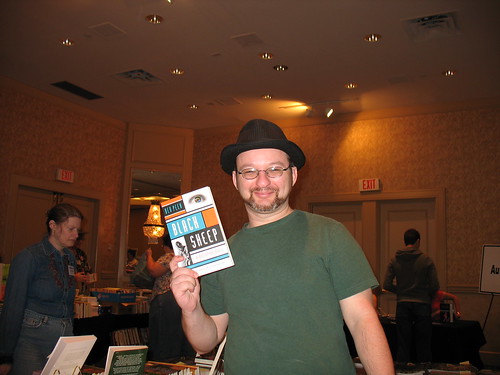 The original caption for this photo was, "Sean Sold a Lot of These," but I'm thinking, in light of the Theordora Goss photo, I should call it, "Black Sheep Is Also For the Less Attractive of You, So Long As You're Wearing a Hat."

We serve all kinds here.

The week is over, which is good. I can go back to writing the novel, thinking about short fiction, and all of that excitement. Anything that stops me from having to see my car covered in frost in the early hours of the morning is a good thing.

The workshop went well, it seems. It had kids painted in words and pretending to be characters that they made and wrote about. It had tarot cards, which, though the meanings of the cards were described as new age wank and ridiculous, ended up with some nice fiction. William Burroughs got a run and the question of if Nova Express made a lot of plot sense was raised. One girl decided she was mute, and wrote all her questions on paper. A boy decided he had AIDS. There was a brief Dr Who moment where one girl said she was the cast off of the Doctor and lost in time. I screamed, but no one paid attention. However, there was no Harry Potter, which, given the release of the last book in one week and the movie two days ago, was some kind of fucking miracle. And one boy spoke with an Irish Pirate Accent for half a day, including a brief moment when he read part of a A Clockwork Orange out. I wish I'd taken a video of that, so I could have put it on youtube. You've not lived until you've heard Burgess' novel read in an Irish Pirate Accent, let me tell you. The assistant neither had bad breath, tried to introduce religion into the workshop, or made a girl vomit; on the other hand, she didn't tell me I was brilliant, and hit on me; in fact, she's the gifted coordinator at a High School here in Sydney, and is apparently going to offer me some work running a stripped back workshop there. A little more conservative, she said, since the school is an all girls Catholic school, so I guess that means no fuck and cunt and me saying, "The only thing Satanism has anything to do with is Christianity."

Somehow, that last part related to Dr Who. I'm not quite sure how.

At any rate, the point is clear: I am here, educating your children. Find a way to rejoice.

The really strange thing, however, was how it was impressed upon me how the place I do the workshop for has quite a bit of credibility for the Gifted and Talented of the World. I always though it was just a holiday program that catered to the over bearing, rich parents of the world who wanted to send their kids away for a week (or a couple of days if they were in Sydney). I mean, they come from Japan, New Zealand, Adelaide, Canberra, shitty little country towns, Perth, Melbourne, and just about everywhere you can get a plane from here, but I just figured if you got the cash, what's that mean? But no, apparently they come because the course is Impressive and Challenging and is one of the few going around which says, Freaks and Geeks, We're Here for You. It's funny the things you fall into, isn't it? Perhaps even more disturbing is that the Assistant, a real teacher with a real teaching job, will be writing a four thousand word essay about the workshop, in which she discusses the course, my teaching techniques, and all of the important ways in which I engage the gifted and talented around us.

I hope she refers to me as Dr. Peek in it. It sounds like something he'd be best blamed for, really. Ben Peek gets enough blame for being an outspoken fuck of an author.