We are the nation of Henry Lawson and the campfire yarn, but just the same we are very bloody wary of people doing what Marlene was doing now. We are inclined to wonder, Is she a name-dropper? Does she have tickets on herself? At the same time, no-one in his paddock has ever spoken like this, not ever, and I was literally on the edge of my chair, watching with the most particular attention as she blew on her Marlboro so its tip burned evenly.

One of the things I've always found compelling about Carey is how old fashioned his Australia is. I haven't read his previous novel, My Life as a Fake, and I haven't read all his novels, but there's just something in Carey's work that always brings me back to this old concept of Australia. The reference of Henry Lawson. The campfire yarn. The use of 'bloody' and the colloquialism of 'has tickets on herself'. All of these combine in this one paragraph, early on in his latest novel, to somehow place his narrator, the painter, Butcher Bones, as this sort of rough edged, rough spoken, blunt, no-nonsense sort of guy. Since I haven't finished it, I've no idea if this proves to be true of the character by the end or not, but it's not really my point. What I'm thinking about is how here Carey is tapping into a national identity. Or a portrayal of one.

The truth is, these days, there's a whole generation growing up who don't know who Henry Lawson is, and wouldn't reference him if their life depended on it. Even I wouldn't reference Henry Lawson. I've not read a whole lot of Lawson, I've no real desire to do so, and on a certain level, Carey's reference of him here is almost a cheat. A shortcut to Australianism. The problems continue, of course: I've never sat round a campfire, much less sat round one and told a 'yarn', and I very rarely use bloody, though I will cop to using the shits and fucks and all the other fine bits of language that Carey's narrator has. Actually, before I go further, I don't want to make this sound like I don't like Carey's Butcher Bones--I think the voice is superb, really, even if it borders on the cliche Australian. I'm not so taken with the second narrator, Hugh, Butcher's mentally challenged brother, but so far in the story the chapters he narrates don't seem to be hugely important. Still, despite this, there is definitely a type of national identity that Carey likes for Australia, and which is also one that I find myself associating with an older, much older, Australia.

It's put me in mind of the Canadian anthology, Tesseracts Nine, edited by Nalo Hopkinson and Geoff Ryman. Tesseracts is an annual anthology dedicated to Canadian writers and one of the attractions to this, and other 'country' based anthologies that I've been buying and reading of late, is to see how those spec fic collections deals with their national identity. It's an interest that got born out of everyone talking about Australian spec fic, which, by and large, is a bland thing on a nationality level. I often struggle to connect anything Australian with the places depicted in the fiction, anything Australian in the narratives, or characters. Part of this is, of course, because speculative fiction doesn't require you to have any kind of nationality present; you can write about a house in the suburbs and not bother with any of the outside world details, or you can write about an imagined world, which need not have any connection to reality. That doesn't mean that it's clean of cultural influences. A lot of Australian speculative fiction is written by white, middle class authors living in the Western world, and those sensibilities show.

What surprises me about Australian speculative fiction is just how much it is defended, locally, as if it were something special despite this. Or even the world's perception. I think we've all read enough of the essays about trying to find some unique Australian aspect in spec fic, and I'm certainly not going to start up that again. Indeed, I'm not even clean of this, because I do believe there are unique elements of it. George Turner's Genetic Soldier springs to mind, but it's also there in Lucy Sussex's recent collection A Tour Guide to Utopia, and Russell Farr and Nick Evens' anthology The Worker's Paradise, released later this year, will be another example of it. And I'm sure there's much more that I'm missing at one in the morning as I type this, but it is also true that more often than not, there's that bland, no-culture, white western world thing going on in Australian speculative fiction. Maybe we should just call it the global westernism influence, or some such thing. Yet still, you would struggle to find a narrator like Carey's Butcher Bones in Australian spec fic, which might be a good thing, in the end. Carey is a very talented author who has a fine ear for narrator's voices, and while he can make Butcher Bones work, an author without his ability would make it painful.

But for all my talk of national identities, the one thing I return to, again and again, is this notion of diversity. Of difference. Ryman, in his introduction to Tesseracts Nine, goes so far as to write that nationalities are "an invention to help us stop thinking and imagining. Englishmen? Shy, formal and snobbish, with bad teeth. Brazilians? Samba, football and favela violence." They become, he explains, a quick shortcut to cliche characterisation, which actually stops a nation from growing and becoming a detriment to a writer. A strong nation identity becomes a problem, because characters shouldn't conform to this, and readers (perhaps--he doesn't say this) come to expect a certain type of character.

A country accepted as a 'universal' country, however, allows a huge range of diversity. Just as whiteness is often invisible, a country that is universal, such as America, is itself invisible, and the characters nationality therefor becomes unimportant. I mean, how many people care about the American identity? Americans come in all shapes and sizes, and while it is true that in the last few years they've picked up a negative image due to world politics, there is also no denying that no one would expect an American to be a bible bashing, conservative in a suit who is busy trying to make millions of oil while trying to stop gays from being able to get married. Not that this is at all the American national identity, but you see my point, I hope. So why then, if America can be a universal country, others can not? Why do people persist in catching a singular national identity, rather than embracing one of diversity? Why not promote diversity moreso as an answer to national identity questions--and by this I don't mean to strip out nationalities, but to have them there, in all their range of contradictions and good and bad and stupid, just as all people are?

It's probably easier to market a set of national identities, however.

At any rate, it's late, and I've no idea where this is going. The topic is of of interest to me at least, however, so if you know of any other nationality based anthologies, drop them into the comments section for me, will you. I've a curiosity.

I keep to myself. I like it that way. But if you're reading this blog, and you're wondering what kind of person I am, well, wonder no more. Here's Rjurik Davidson's (

Yes, in my spare time, I am a vigilante. Thank you for asking. 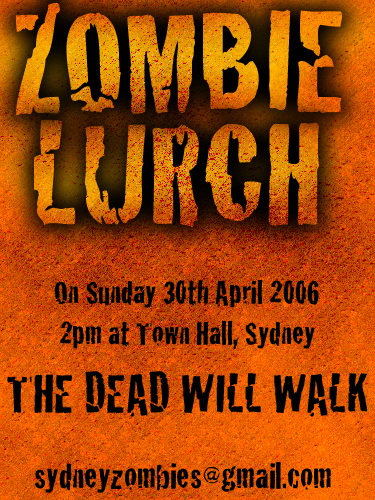 A while back, I remembering seeing photos of a zombie lurch in Toronto (I'm not sure if she organised it or not, but they were on

porphyre's blog, as well as on Boing Boing, and it looked pretty cool). Now apparently there is to be one in Sydney, organised by Rachel Young (

rachelsoma), and held on this very soon to be upon us Sunday. It starts at two outside Town Hall and travels its way down to the Opera House.

I'm pretty sure others have heard about it, whereas I have simply been living in my little rock because I can't stand direct sunlight or thoughts, apparently. At any rate, I won't be there, as I've got to work, and I'm meeting with Kathryn the Dialogues Artist (

speshal_k) afterward, but the two of us might be able to swing down for the end, at least to have a quick look. Still, ignoring that, I reckon ya'll should go.

It's the zombie speak for the night. Now go click the Zombie Lurch site.
Collapse